With my computer thoroughly crashed I'm going to fall back on a book review.  I took advantage of Princeton Press's offer of a free review copy of one of their latest books, The World's Rarest Birds, an encyclopedic treatment of the world's endangered species.

The book has its origins in a photo contest run in Europe for rare birds that ultimately turned into this project, an attempt to depict most of the endangered birds of the world (here a cyclodes of some sort) apparently the only photo of it in existence: 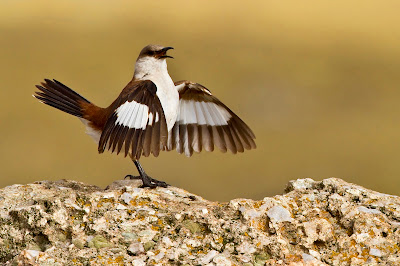 The first 60 or so pages of this about 350 page near coffee-table sized book deal with the factors leading to population declines.  Most of us are familiar with these, but it deals with them in-depth and gives some interesting specific examples (including of a starling species that's impressive enough that the captive breeding facility was broken into by gunmen to steal the birds for the cagebird trade).

The remainder of the book gives index card sized vignettes (4 to a page) about many of the endangered birds of the world.  The title and the presentation imply that this is an exhaustive list.  It may well be, but the determination of what's counted as endangered obviously varies.  It ranges from birds that are almost certainly extinct through birds with populations in 6 figures like Marbled Murrelet.  Kirtland's warbler gets a mention in one general paragraph about North American birds, but doesn't get the full vignette treatment that about 600 other birds receive; I found this surprising.

The book does lay out the reasoning behind not declaring birds like Ivory-billed Woodpecker or Eskimo Curlew extinct;  I'm not sure that I totally agree with it, but the book does at least use the past tense in its treatment of many of these.

There are many impressive photos in the book, but I think that the impressiveness of many of them is based on their rarity.  In a book of nothing but really rare birds this effect somewhat wears off.  There's definitely a depressing aspect to this book; for many of us birding is a huge escape, reading about birds that are dying out (and there's clearly many many species that are), is somewhat sobering.  I think that would have been helped somewhat by putting in some highlights of recovery programs that have worked as sidebar-type articles.  It's also hard to put a lot of the birds in context.  Just opening the book at random, I find vignettes about Apalis's, wood-hens, bushbirds, warbling-finches, crombecs; I've never heard of any of these.  In some ways it's hard to get that emotionally invested in birds I've never heard of.  That problem is probably one of the main goals of this book.  If people are more aware of specific birds, or habitats that need protection then money will more likely be able to be raised.

At between $28 and $45 depending on the source, this is not a super-expensive book.  I read a Steve Howell editorial once about birders' unwillingness to buy a book that they can review over and over when there's not a big difference between that number and a trip with the family to a restaurant that people wouldn't think twice about, and tend to agree with him.  This is a worthwhile book to own and certainly has a ton of information in it.
Posted by Matt at 1:03 AM